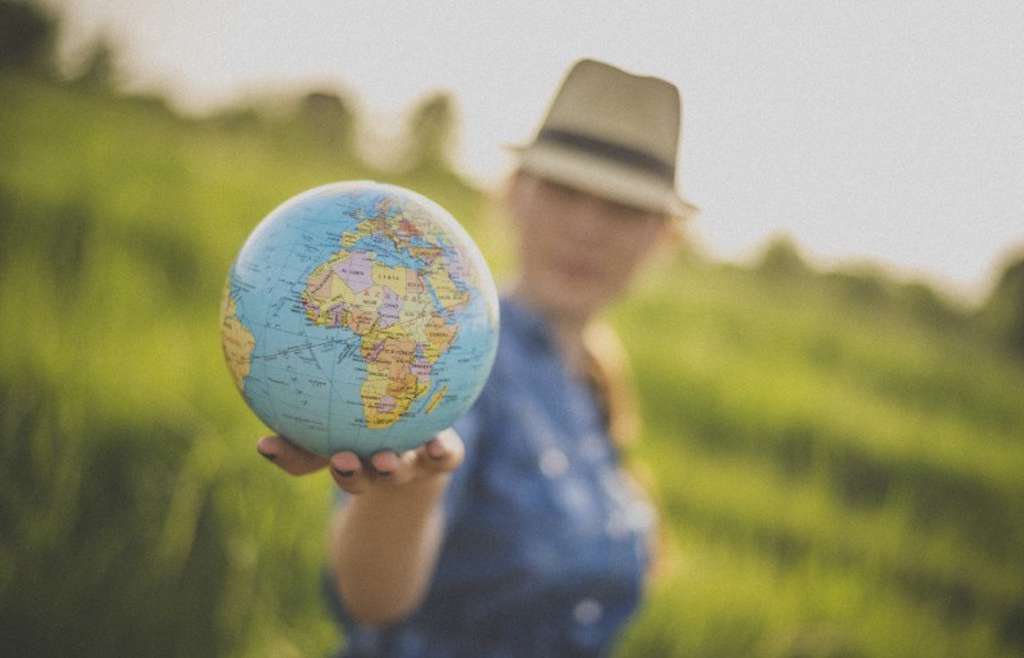 At the CBC, we share the love of travel, to places both near and far. Seeing life through a wider lens enriches our experience and deepens our appreciation for the cultural diversity around the world. Travel amounts to a work that has a lot to do with creating and growing a consciousness.

Personally, my favourite part of travelling is meeting new people and trying local foods. I’ve found the surest way to truly get to know the culture of a new place is to immerse yourself within the flavours and customs of local cooking and dining.

My travels through Asia, Australia, South and North America have brought me face to face with some pretty strange (fascinating!) foods and very interesting people. Don’t get me wrong, I have felt tons of apprehension in the past trying foods I’ve never heard of or laid eyes on before- but as I’ve started to travel more and more, I’ve been outgrowing this fear. There is an actual biological rationale to this, that Michael Pollan writes about in The Omnivore’s Dilemma. As omnivores, we often find ourselves trapezing “Neophobia,” a sensible fear of ingesting anything new; and “Neophilia,” a risky but necessary openness to new tastes. Cuisines embody some of a culture’s accumulated wisdom about food, that have been developed and adapted over thousands of years. Befriending the locals and sharing their favourite dishes works to transcend these fears we’re hardwired with. To taste is to kickstart a chain of understanding about life, natural instincts, the ecology that supports them, and the culture that supports the whole system.

Eating is innate to us as humans; while carrying intricacies that point toward what it means to be human. Yes, we are gratifying a basic need, while also illustrating, “an elaborate structure of taboos, rituals, recipes, manners, and culinary traditions …” as Pollan points out (4). If we can adopt an alternative way to gratify this need, we can then kickstart the understanding that therereally is more than one wayto do things. Food is just the beginning. This in turn teaches us to tolerate, coexist with, and ultimately honour our cultural diversity. If this world needs more of one thing, I’d choose empathy; and I think this is a good place to plant that seed.

Okay feet back on the ground (for a minute at least) …We close in January at the brewery so it affords us the luxury to get out into the world. Peru has had a pull on me over the last two years; and I’ve just gotten home from an amazing trip.  This is a world coloured by a boundless love of life among the local communities.  This year, I was lucky enough to stay with a close friend’s family, just outside Lima. Peruvians hold the value of family very close to their heart. You’ll never feel alone here; I was welcomed whole heartedly. This is demonstrated through sharing family meals. My hosts, Tia and Tio (aunt and uncle) treated me as one of their own. They taught me about a few traditional meals that highlight the diversity of the local foods this colourful South American country has to offer. It’s hard to say who was more excited to share this experience. 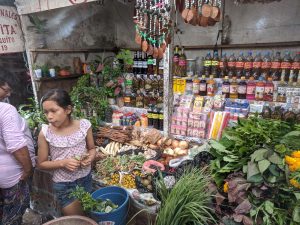 Supermarkets are very uncommon in Peru; instead we went to the local street market to gather our ingredients. Naturally, we took a ‘mototaxi’ or ‘tuktuk’ there (a motorbike with a carriage attached for passengers)- it’s the local way. Each region in Peru has their own spin on national dishes, using the ingredients grown close by. Ceviche is what we chose- it is prepared with raw fish cured in citrus and chilies. We gathered local perico (white fish) from a fisherman, to go with the red onion,limón (a more acidic version to our limes) and locally grown chillies, aji amarillo (a beautiful yellow/orange colour) that we bought from local growers. A common phrase “Yo trabejo en una chakra” rings true through the open air of the Mercado…it means “I work a fertile land.” If it wasn’t the producer themselves selling us the ingredients, it was their family members. The ingredients are harvested and brought into the market daily, the selection changing with the seasons. Tia and Tio have developed relationships with these local producers, maintaining a connection not just to their food but the land it grows from.

I’ve learned a lot about the Slow Food movement in my time at Charlotteville. This experience was an honest representation of Slow Food values, demonstrating a connection to farms and farmers, to the plants and animals we depend on. Tia and Teo taught me how to make their family’s version of the traditional dish which served as an embodiment of their cultural pride. They add fresh and fried maiz (corn), and lots of cilantro, and finishing it off with a fried banana chip like a flag.  By simply recalling people to the infinitely superior pleasures of traditional food enjoyed communally… “The consumer becomes, in [the movement’s] founder Carlo Petrini’s phrase, a ‘coproducer’ – eating contributes to the survival of landscapes and species and traditional foods that would otherwise succumb to the fast-food ideal of ‘one world, one taste.’ This turns the act of subtraction into one of addition” (Pollan, 239-240). We prepared the ceviche at home and shared the meal at their version of the harvest table. It was delicious and I loved being a coproducer in this experience. 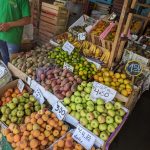 After becoming familiar with these values and equipped with some Spanish language skills, I ventured on to Iquitos. Being a gateway to the Amazon, Iquitos, Peru shares a border with Colombia to the northwest and Brazil to the northeast. I especially enjoyed the street markets here: abundant in colours, flavours, smells and sounds; this truly was a feast for the senses. I tried some of the freshest citrus fruit out here, gaining a new appreciation for quality that only local production affords. 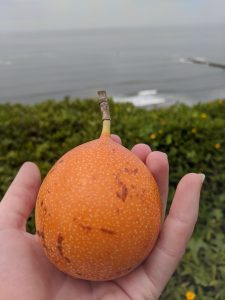 Some of the offerings: starfruit has a vibrant orange/green skin with a nice tart taste; granadilla, who’s beautifully speckled orange skin peels back to reveal a world of seeds inside that taste like lychees, to which maracuyá(passionfruit) is a sour cousin. Peru has dozens of species of bananas ranging in shape and yellow/green colours. Pitihaya, or dragon fruit, is pink and scaly on the outside, whose skin you peel back to reveal white flesh with black seeds. It is considered a delicacy and for a good reason; it is refreshing in a subtle way that you won’t understand until you try it.

The notion of family extends to the markets: there are long communal tables set up that the vendors use to serve their offerings to the patrons. They’re called open-air markets because there are no walls dividing the stalls, tables or even the market itself from the world outside. This inspires a whole new layer to the idea of communal. The market carries stories as opposed to bar codes; based in values rather than just for value. 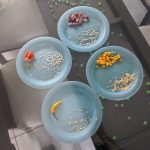 From this market I gathered some beautiful chili peppers of which I saved the seeds and brought back home to the place where, “yo trabejo en una chakra” of our own.  One of these is known as aji charapita – a tiny orange chili that packs a punch. I’m very excited to grow the value of what I’ve learned in Peru and share it with my friends and family at Charlotteville.

Mira a (look at) Peru… they may have their fair share of problems on a global scale, but they have some things figured out locally that should never be modernized.

Brillat-Savarin, with internationally celebrated work in gastronomy and author of The Physiology of Taste,draws a sharp distinction between the pleasures of eating: “the actual and direct sensation of a need being satisfied,” a sensation we share with the animals and the uniquely human pleasures of the table. These consist of “considered sensations born of the various circumstances of fact, things, and people accompanying the meal”- and comprise for him one of the brightest fruits of civilization.Every meal we share at a table recapitulates this evolution from nature to culture… “In the same way the raw becomes cooked, eating becomes dining” (Pollan, 272). 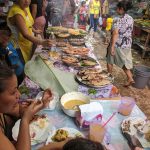 We truly find common ground in sharing a place at the table.  Sharing a moment and a meal is that one thing that’s universal; something we partake in that can truly transcend our differences – a bridge between cultures. It’s the key to unlocking the door to all that is good in life and is by far the best discovery I’ve made travelling so far.